A beautiful Deck of playing Cards from the Colony Club, New York City. Harry Houdini has SIGNED the ACE of Spades. This playing deck of cards was most likely used by Houdini while doing some card tricks for a private party in New York City. These playing cards are magnificently preserved and matted in a frame for presentation. The pictures show the ACE of SPADES SIGNED by Houdini, which is professionaly laid out among the other cards in a frame ready to decorate your wall.
quintessentialrarebooks-6500.00-7477c1f75275149156aa0ad10d8f7b83
Found: 2014-08-18
$6,500.00
View Details 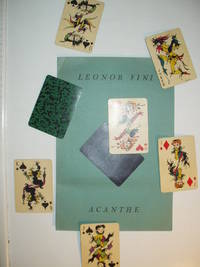 Paris: Acanthe Gallery , 1950. This is a very good set of two packs of playing cards and a carrying case for them + a prospectus. There is a folded sheet of heavy green card stock:a "Prospectus" in very good condition with just a slight crease to front and back not affecting the two original cards tipped-onto the front of the Prospectus which show an example of the face card and its obverse (the patterned side of the card). Inside there is one double-page tipped-in text in French discussing Surrealism, games of chance and the work of Leonor Fini. Original clamshell box with 2 compartments for 2 decks of cards and slipcase cover. Printed paper title label: Leonor Fini - Jeux de Cartes. Each... one of the face cards of each suit: Jack, Queen, King and a Joker have fanciful designs of men and women on them, the colors still very bold and bright. All designs typical of Fini's work of this period. The cards have all gilt edges. One pack has a purple "sponge" patterned back, and the other has the same type pattern in green. Light soiling to spine of box and to slip case. Small stain to corner of slip case, splits to head and tail. Overall in very good condition, with all cards very clean, no marks or creases. Both decks are complete. Bibliographical reference: Uwe-Volker Segreth, Spielkarten, Jugendstil und Art Deco. Edition Christian Brandstetter, 1994. pg 152-53 for reproductions of face cards, and also an important note concerning the number of cards per deck issued in this edition. It states 52 cards + 1 Joker per deck. Box is 5.5" high X 3.5" wide X 1" thick. Prospectus is 4to size, 11" high X 8" wide. A beautiful set. . Very Good. more
designbooks-850.00-74114865bc3548467743f1054573a49c
Found: 2014-08-18
$850.00
View Details

Printed in color and housed in a tiny leather case framed in brass, the upper side forms a latch with a brass link. Each suit is complete with thirteen cards for each one plus two Jokers. The leather tab that forms the latch is a little tender, else a fine and unique set.
buckinghambooks-375.00-b7de71f3d187ef9ca93617b9cf52b41d
Found: 2014-08-18
$375.00
View Details 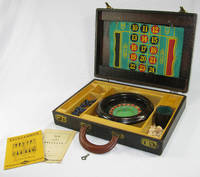 [Folding Backgammon Board in the Form of a Finely Bound Book, The History of England] 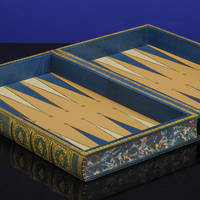 [Folding Backgammon Board in the Form of a Finely Bound Book, The History of England]

n.d., c. mid-20th C. Anyone For A Game of Backgammon, Finely Bound?[BACKGAMMON]. [Folding Backgammon Board in the Form of a Finely Bound Book, The History of England]. N.p.: n.p., n.d. [c. mid-20th century). Folding box as two folio faux volumes of The History of England, richly bound in full blue-green morocco, spines extravagantly gilt, boards onlaid with brown and blue-green morocco in checkerboard pattern with gilt fillets and ornaments. The interior is onlaid with dark blue, tan, and white morocco, with gilt borders, dentelles, and ornaments, to form a backgammon board. The outer edges of the box are marbled. Included is a matching leather cylinder case housing the backgammon counters... (15 red, 15 white) and dice (two sets and one doubling die). The cylinder case, when pulled opened, becomes two shakers. Spines mildly sunned. An unusual and beautiful game board in fine condition.Backgammon is one of the oldest board games for two players. The playing pieces are moved according to the roll of dice, and players win by removing all of their pieces from the board. There are many variants of backgammon, most of which share common traits. Backgammon is a member of the tables family, one of the oldest classes of board games in the world. Although luck is involved and factors into the outcome, strategy plays a more important role in the long run. With each roll of the dice, players must choose from numerous options for moving their checkers and anticipate possible counter-moves by the opponent. Players may raise the stakes during the game. There is an established repertoire of common tactics and occurrences. Like chess, backgammon has been studied with great interest by computer scientists. Owing to this research, backgammon software has been developed capable of beating world-class human players. (Wikipedia). more
davidbrassrarebooks-2500.00-0d61228b0797f3e9be74176185325485
Found: 2014-08-18
$2,500.00
View Details

Cloth: Generally refers to a hardcover with cloth covering the outside of the book covers.