[CONSECUTIVE RUN OF FORTY-NINE ISSUES OF DABOLL'S The New England Almanac, and Farmers Friend FROM 1844 TO 1892] 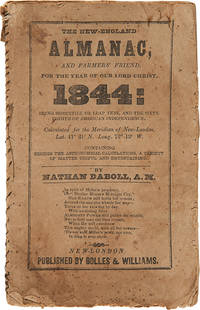 [CONSECUTIVE RUN OF FORTY-NINE ISSUES OF DABOLL'S The New England Almanac, and Farmers Friend FROM 1844 TO 1892]

New London, 1891. Forty-nine complete individual issues, from 32pp. to 80pp. each. Mostly original printed self-wrappers, with a handful of issues bound in separately-printed wrappers, all stitched. Partial loss to one leaf in 1847 issue and penultimate leaf in 1879 issue, small area of loss to last leaf of 1891 issue. Various levels of rubbing, edge wear, staining, foxing, and toning. Overall, very good condition. A substantial, unbroken run spanning six decades of the Daboll family's THE NEW ENGLAND... ALMANAC, AND FARMERS FRIEND. This collection of almanacs provides an important historical record of the agricultural and economic conditions in Connecticut in the latter half of the 19th century, with important information on astronomical and atmospheric conditions and a wealth of articles intended to help the farmer. Within these almanacs there is also a vast amount of information on the economic life of New London, evidenced by the numerous advertisements present throughout. This almanac series created by Nathan Daboll (1780-1863) and produced by him until the 1864 issue, after which they were brought forth by his son, David A. Daboll. In addition to being a publisher of almanacs, Nathan Daboll was a Connecticut politician, judge, and author of mathematical textbooks; he learned both the almanac and textbook ventures from his own father, also named Nathan Daboll, and passed them both to his son. In fact, Nathan and David Daboll together revised the senior Nathan's original math textbook, SCHOOLMASTER'S ASSISTANT, into DABOLL'S NEW ARITHMETIC. All but one of the almanacs here was published in New London; the 1845 issue carries a Norwich imprint. A wonderful, unbroken collection of 19th- century American almanacs. DRAKE 1208, 1219, 1232, 1254, 1273, 1289, 1322 (for issues published before 1850)more
williamreesecompany-2500.00-3a97bff5e6d339e7c8028470dacbdfda
Found: 2021-10-29
$2,500.00
View Details